All images in this post were taken during Extinction Rebellion Bristol‘s ‘Disrupt the Circus of Excess’ action, protesting against the damaging and harmful fast-fashion industry. Join Extinction Rebellion at London Fashion Week SS20 to be a part of the next Boycott Fashion action. 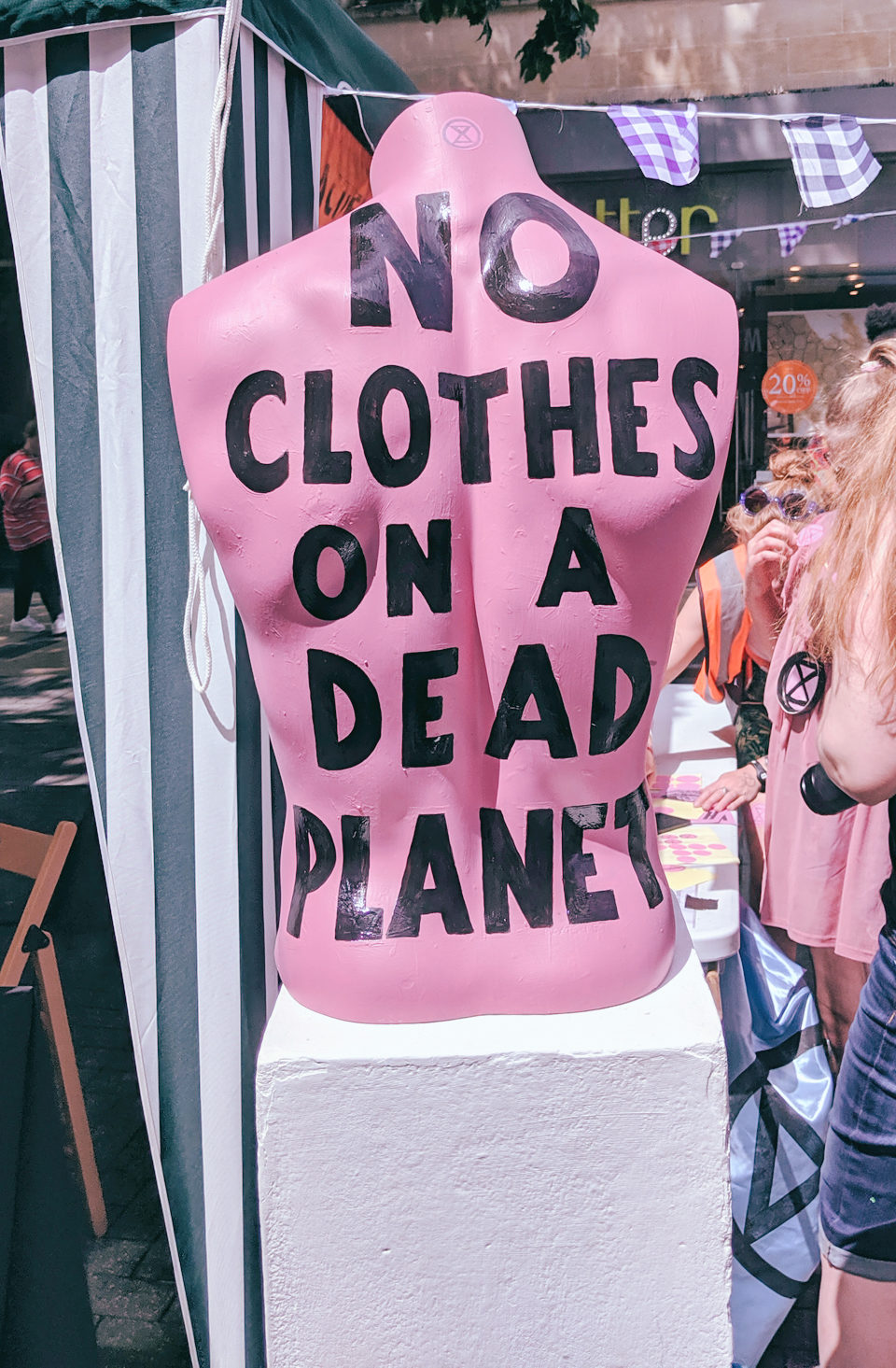 “I want to be a fashion designer” is a statement I’ve clung to since I was a child.

I was that too proud girl in the class at school who knew exactly what she wanted to be and what she wanted to do with her life. I was the one being praised by the adults because I’d decided exactly what I wanted to do with my life before all of my peers. I needn’t worry about how I was going to get there, so long as I knew it was what I wanted. It came from my family, my teachers, anyone who was approaching me with small talk, and eventually, interviewers and journalists who were interested in knowing more about ‘where my blog all began’.

It’s never been an untrue statement. I used to think up plans for hypothetical dream catwalk shows; I focused a lot of my home education work on designing and understanding how to properly formulate research in order to support a collection’s vision. It’s always been there and it’s always been something I’ve wanted to do. But now, there’s this big bad phrase that seeps into every thought and idea I ever have…

“With a broken planet, we will have no gay rights, no feminism, no respect for trans people, no attempt at fairness and justice for people of colour. What we will have is a fight to survive and a lot of violence.”

I don’t quote this to compare fashion to any form of oppression or unjust inequality (although it definitely exists within the industry) but with a broken planet, we will have no fashion. The fashion industry – the glitz, the glamour, the trends, the fads, the ‘conscious collections’- will no longer exist as it stands because we as citizens of the planet, will have much bigger problems in our hands. 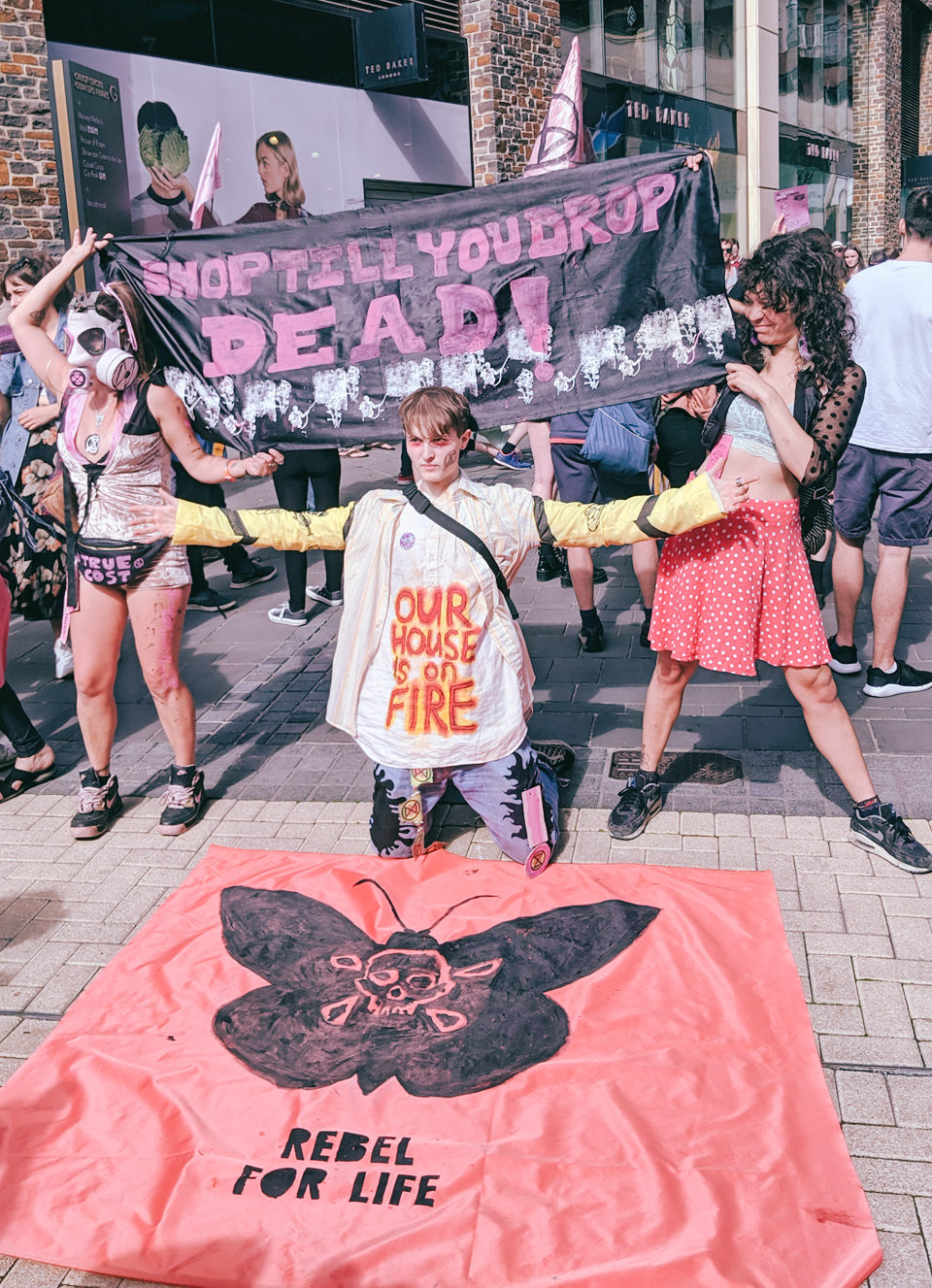 Well, we already do. If we’re paying attention, we’ll be acknowledging the fact that global warming is already seriously at play. When I originally began writing this piece several months ago, India, being one of the largest garment manufacturing countries in the world, was already facing heatwaves of over 50c, causing deaths by heatstroke, melting asphalt roads and extreme water shortages – but since then, even the UK has been hit with extraordinary temperatures of almost 39c, alongside Paris, France, which reached a staggering 42c.

And although there may be no fashion-related link, the Arctic (yes, the Arctic) has just experienced wildfires due to dry conditions following on from ice-sheets melting. We have also even more recently seen the Amazon rainforest set alight, not only from dry conditions but also through intentional action which was supported by the Brazilian President, Jair Bolsonaro. This and previous acts of illegal land clearing have not only been linked to the demand for meat but also to the demand for leather for the fashion industry.

With the textile industry more polluting than maritime shipping and international flights combined (according to Parliament’s inquiry into the Sustainability of the Fashion Industry), I think it’s reasonable for my perception of fashion to have changed, or perhaps even, evolved.

If someone were to ask me now, “Do you want to be a fashion designer?”, my answer would undoubtedly begin with the words, “Yes, but”. 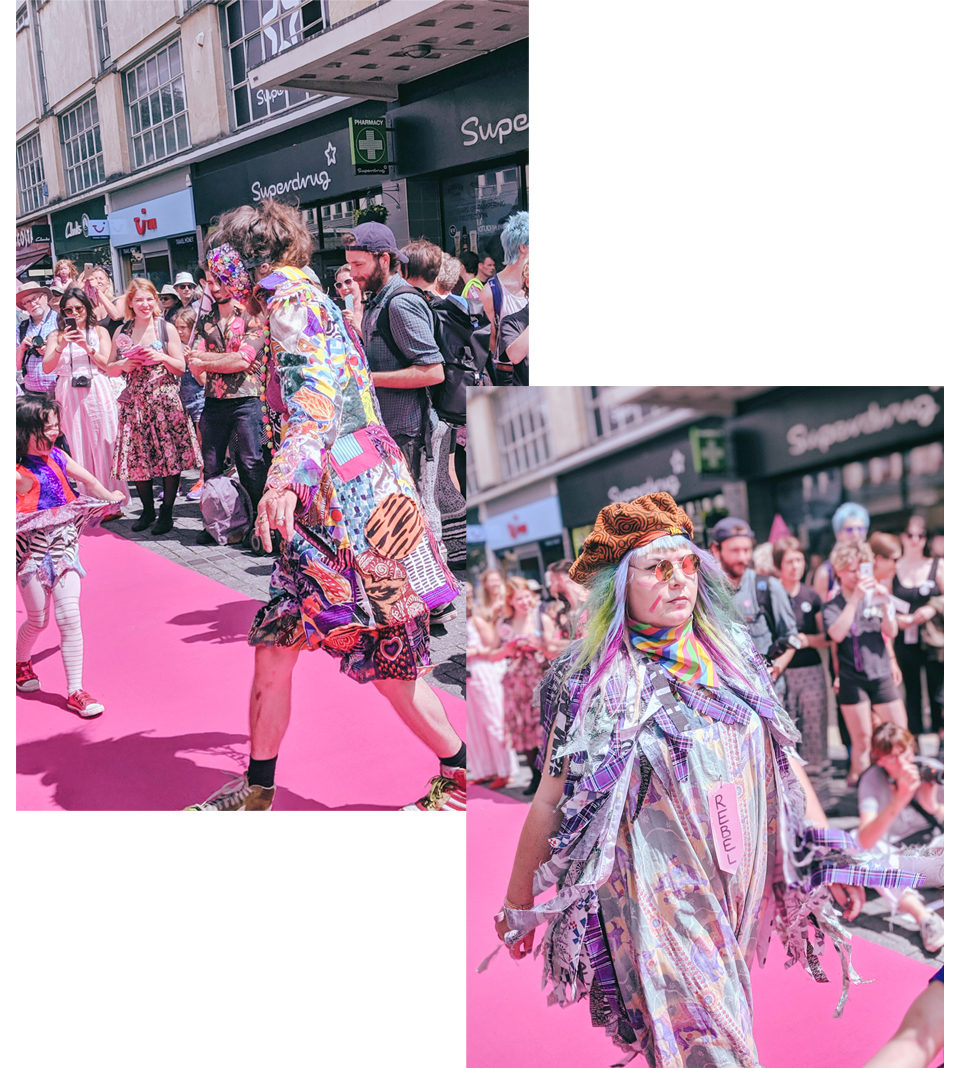 Yes, but only if I can be assured that my Government is doing everything it can to lessen the effects of the climate crisis.

(Including acting on recommendations put forward by the Environmental Audit Committee.)

Yes, but only if there are regulations in place for major corporations and global businesses to ensure they’re not overproducing.

(I’d like to include this post from Helpsy, which shows a piece originating from the BBC, with a representative of H&M saying that they’re not going to cut down on the amount of product they offer, despite claiming to be aiming in a more sustainable direction.)

Yes, but only when exportation of manufacturing has become less polluting, less toxic, less exploitative and unethical and we’re doing all that we can to support third world countries which are already experiencing the dangerous impact of the climate crisis.

Yes, but only when we’ve done absolutely everything we can to avoid reaching a disastrous tipping point.

Of course, that’s not to say that there aren’t brands out there already complying with what I consider, ethical and sustainable standards. There are, and as much as I never like to imply ‘we need’ anything – we do need these brands to continue being leading examples. No brand or designer can have zero impact whatsoever, even if you’re reusing fabrics and running your factory on solar power, but those who are headed in that direction, shouldn’t stop. They do indeed provide a purpose. 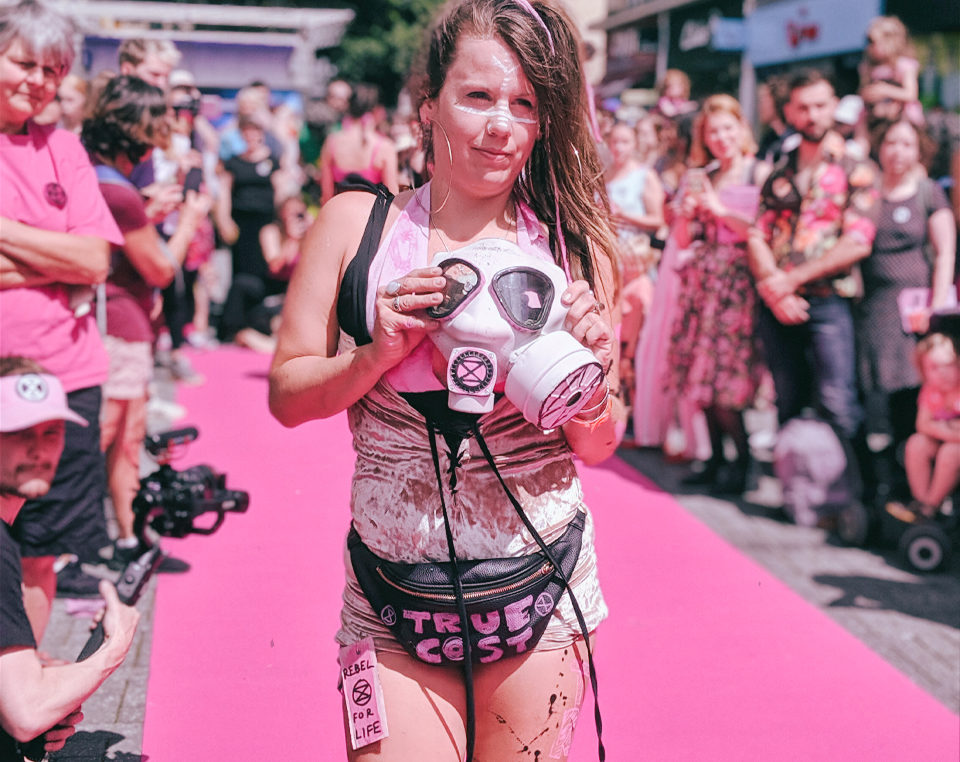 But that purpose needs to be reevaluated, especially when it comes to how the current cycle of fashion works; including how designers play a part in the likes of London Fashion Week, which this season is said to be its last, at least in a symbolic way, for those attending as part of Extinction Rebellion’s funeral protest on the 17th September 2019. (This will be my first time attending fashion week – oh, the irony).

Fashion week – fashion month, fashion season; whatever you want to call it – is based on the idea of looking to the future. It’s a way of the fashion industry, whether it be fast, luxury, couture or independent, showing the world what to expect to see in stores and in our wardrobes over the coming months. For September 2019, it’s a look at Spring/Summer 2020. A summer which will most likely, be even hotter and more unpredictable than this year.

In my opinion, when looking to the future is becoming ever more daunting and quite frankly, terrifying, the idea of a spectacle as coveted as fashion week continuing on as business-as-usual seems almost inappropriate.

Shouldn’t we be using that time and that energy to focus on how we can make positive changes for Spring/Summer 2020, rather than focusing on clothes that will quickly be replaced next season?

One argument which has been raised since Extinction Rebellion announced their planned presence at London Fashion Week, is that fast-fashion should be the focus and that we should still be appreciating the creative side of fashion month and what it does for independent designers. 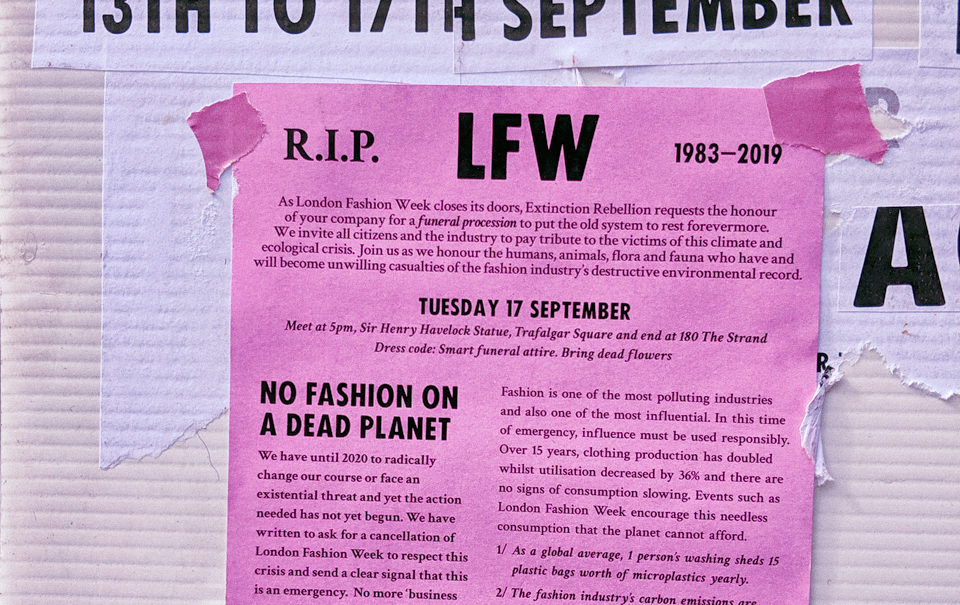 What this point-of-view misses though, is that fashion week (at least in the UK) is in no way detached from fast-fashion and that there is a lot of power and influence in attendance. For years, the British Fashion Council (which organises London Fashion Week), has had the Topshop Showspace on the schedule, with Arcadia Group being one of its patrons and we have seen A-list celebrities and major industry leaders grace front rows.

To say it is a hub of creativity that needs to be protected ignores how intrinsically linked London Fashion Week is to fast-fashion and to how much power the event and its attendees have in creating what could be incredibly influential change.

When it comes to my own – former? – ambitions, the phrase “I want to be a fashion designer”, climate emergency or not, is a pipe dream I’m nowhere near close to making a reality. Sorry, ten-year-old Tolly who had plans to own a store in London by the age of 21 and send her very own models down a catwalk, not only are there slightly more pressing matters to attend to, there’s also life and all of its ups-and-downs to take into account, too.

If I am to start answering the “So, what do you want to do?” question differently, I could start to see my new answer as a selfless act because the truth is – the world doesn’t need me to design new clothes. Just like how it doesn’t need an event to predict upcoming trends when there is already science predicting what will happen if immediate action isn’t taken in the face of our current emergency.

Go into one high street store, browse on one website for clothing or keep up-to-date with just a single luxury designer’s frequent collections, and that’s enough of a reason why. Times it by a thousand, and so on. 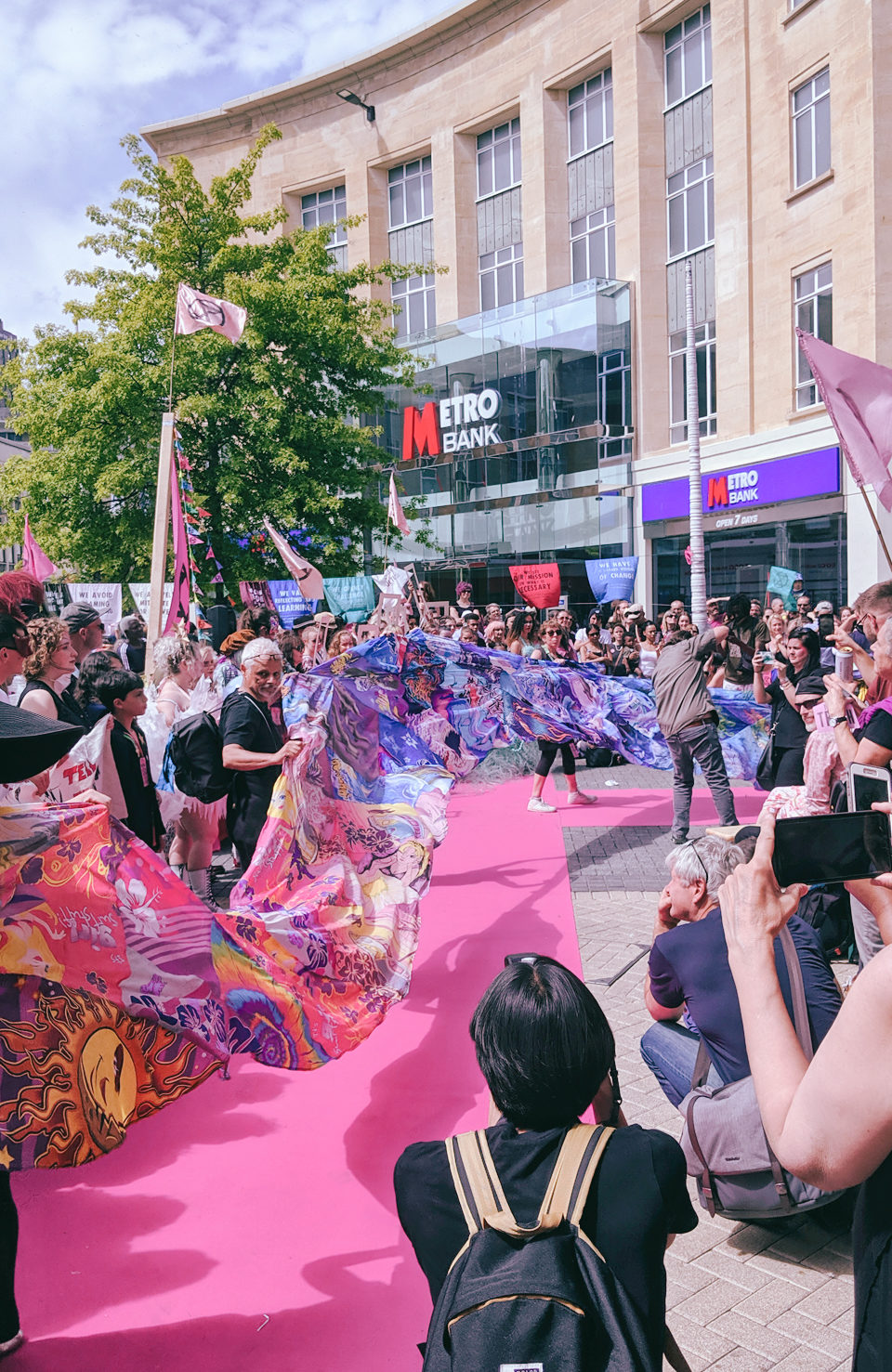 Even the fashion industry of years gone by doesn’t need me because the material ghosts of old collections still hang in thousands of second-hand shops and the unworn depths of peoples wardrobes.

I wouldn’t rule that option out completely, of course. I would rather reuse what is already there than contribute to the production of anything new or virgin. Upcycled and remade clothing can be done and it can be done well. Take a look at Christopher Raeburn and Zero Waste Daniel for two prime examples. Get me a studio and a new sewing machine and I’m sure I’ll be off with my best attempt at this.

This isn’t exactly a new realisation; that maybe I, and the planet, have outgrown my childhood dream. I’ve known it for a while now, that I would never want to start my journey as a designer on a path that leads to more environmental and social impact. I would only ever want to do it right.

In fact, this isn’t the first time I’ve announced this publicly either – the first time I did, was during a speech I made on College Green, for Extinction Rebellion Bristol’s Summer Uprising.

No matter how many times we say small steps matter, or that we don’t need to do everything perfectly – I know this is something I would have to do perfectly. I could never start creating something that would harm the planet or my future, more than it already has been and this is the mindset that I believe is lacking from those who continue to support fashion week (and have criticised Extinction Rebellion’s upcoming actions). 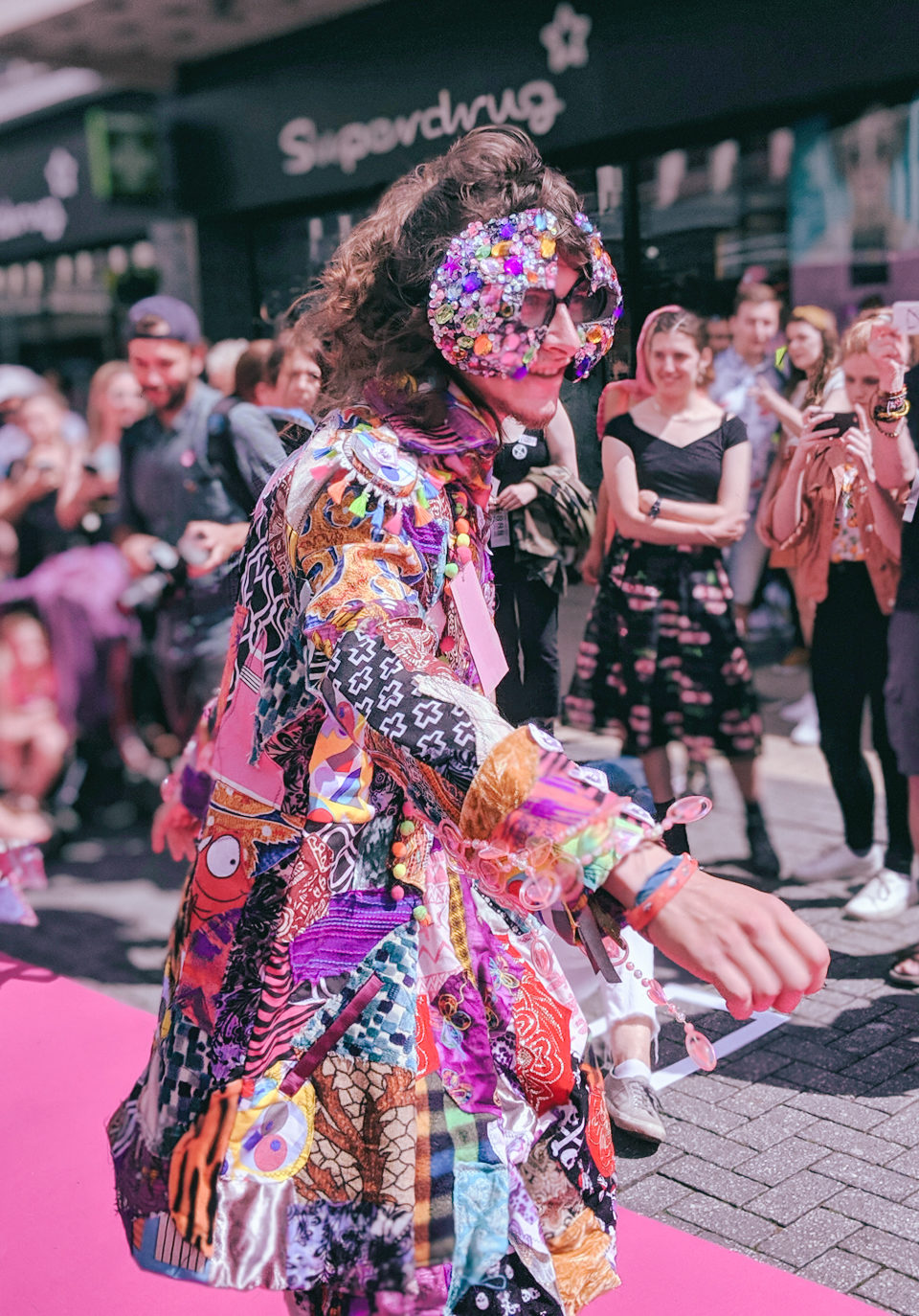 This is where I suppose you could say things get a little sad. It reminds me of being in London during Extinction Rebellion’s first International Rebellion Week. A young boy explained that despite the crisis we face, he still really wants to be a musician. That’s his dream, as well as having a family. But, this boy, much younger than me, was questioning it due to the uncertainty of knowing if he has a future that will give him enough time to achieve these dreams.

Kids, who are 10 and 11, will only be in their early twenties by the time that twelve-year countdown comes to an end. That’s where I’ll be soon, and if my life now and everything I’ve ever heard about being a young adult is anything to go by, I still don’t have anything figured out. Even less so, when “I want to be a fashion designer” is something I’m willing to start letting go of.

This is an emergency. If there’s anything I – or other designers – should be designing, it should be a life vest, suitable for wearing in extreme heat and weather conditions when the ice has melted (completely) and sea levels have risen.

If I have the time, that is. In between all of the protests and the fear, I’d quite like to enjoy myself whilst I’m still able to.

Will you be at London Fashion Week? Let me know your thoughts in the comments.